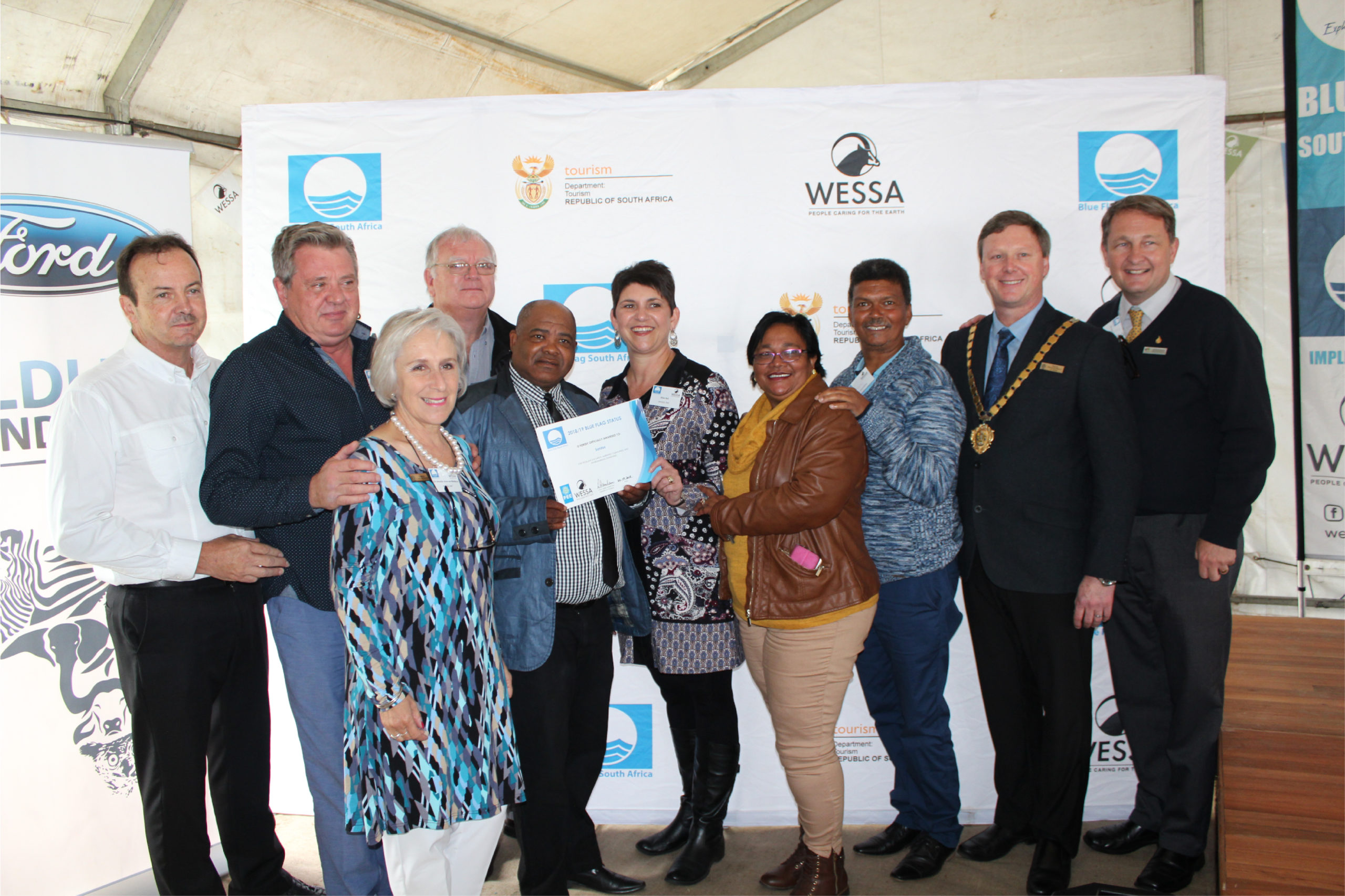 Posted at 11:20h in Media Releases by Wessa

66 Blue Flags will be proudly flown at 46 beaches, 8 marinas and by 12 sustainable tourism boats around South Africa over the forthcoming 2018/19 South African Blue Flag season, which opens officially on the 1st of November 2018. This was announced at the National WESSA Blue Flag launch hosted by the Mossel Bay Municipality at Santos Beach, Mossel Bay, in the Western Cape on the 12th October 2018.

The Blue Flag programme also allows for potential Blue Flag sites to participate in the Pilot Programme. This year 24 beaches across three provinces have been awarded Pilot status and throughout the 2018/19 Blue Flag season, WESSA will work with beach managers and Tourism Blue Flag Beach Stewards from these Pilot beaches, towards the longer-term goal of achieving full Blue Flag status.

Speaking at the event, The National Department of Tourisms’, Director of Programme Planning & Implementation, Ms Patience Molokoza said, “Through programmes like the Tourism Blue Flag Beach Stewards that is implemented by WESSA, we can address the issue of South Africa’s youth unemployment. This programme is meant to capacitate the youth and provide skills training and development. Programmes like these would not be possible if it were not for partnerships with municipalities.

She also went on to say, “The Blue Flag project has a number of highlights, we have managed to educate and train more than 14000 people over a period of two years and we applaud WESSA for their involvement in this programme.”

Vincent Shacks, General Manager of the Ecotourism unit noted that the municipalities, marinas and boat operators who have achieved the prestigious Blue Flag award today are our sustainable tourism champions and all South Africans should be proud of these achievements. Blue Flag is a voluntary eco-label, so all of the effort and funding that is put into improving these sites is done in the interest of those using them. We are especially inspired by those sites where municipalities, the business sector and local residents are all working together to maintain this standard of excellence”

Since its launch in 1987, the Blue Flag Programme has continued to grow, not only regarding the number of member countries and sites involved, but also in its range of expertise within marine and freshwater environments.  WESSA is proud to be the national implementing partner for Blue Flag in South Africa since 2001.

“As the town of Mossel bay, we are honoured to host the launch of the new Blue Flag season and as the Mossel bay council, we see the importance of local tourists and we try to keep our facilities in good condition to welcome tourists to our shores during the summer seasons. We always try to maintain our facilities and one of our top priorities to maintain our Blue Flag status because it is a well-respected award that takes educational, environmental and cultural value of the beach into account, ensuring that each Blue Flag beach is not only beautiful and safe, but also environmentally friendly and socially responsible.”

The WESSA Blue Flag Programme, now in its 31st year, is focused on the conservation of marine and coastal habitats, and is designed to raise environmental education and awareness, and increase sound environmental practices among tourists, local populations and beach management.