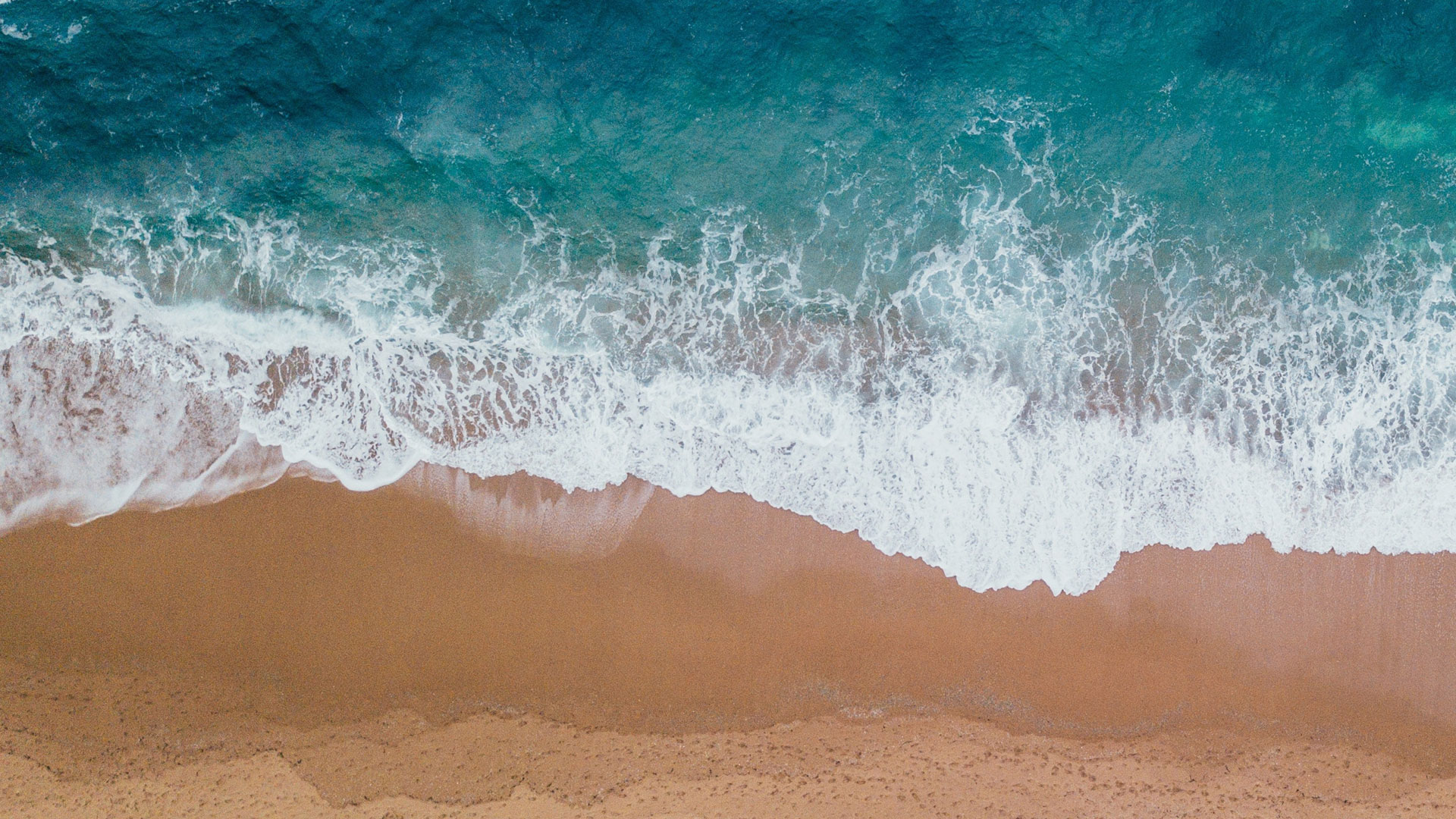 A world-renowned eco-label trusted by millions around the globe 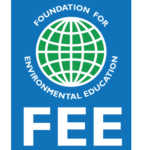 The iconic Blue Flag is one of the world’s most recognised voluntary eco-labels awarded to beaches, marinas, and sustainable boating tourism operators.

In order to qualify for the Blue Flag, a series of stringent environmental, educational, safety, and accessibility criteria must be met and maintained.

With over 4500 sites in over 45 countries around the world, Blue Flag is actively contributing to the sustainable development goals. Blue Flag also campaigns against disparity, inequality, unemployment, health threats, depletion of natural resources, environmental threats, pollution and general environmental degradation.

In South Africa, Blue Flag has been operational since 2001 and has proud municipal, marina and tourism boat partners in 18 coastal municipalities around the country.

Blue Flag is voluntary, which shows a very strong commitment to environmental sustainability from those municipalities, marina’s and tourism boat operators that are awarded annually. All properties and companies that apply for the Blue Flag award are assessed by a South African National Jury as well as by the Blue Flag International Jury in Europe.

Please ensure all attachments are included in your application and emailed to tevya.lotriet@wessa.co.za by no later than 25 April 2022.

Large attachments can be forwarded via https://wetransfer.com/ if necessary.

Feel free to contact tevya.lotriet@wessa.co.za if you have any questions. 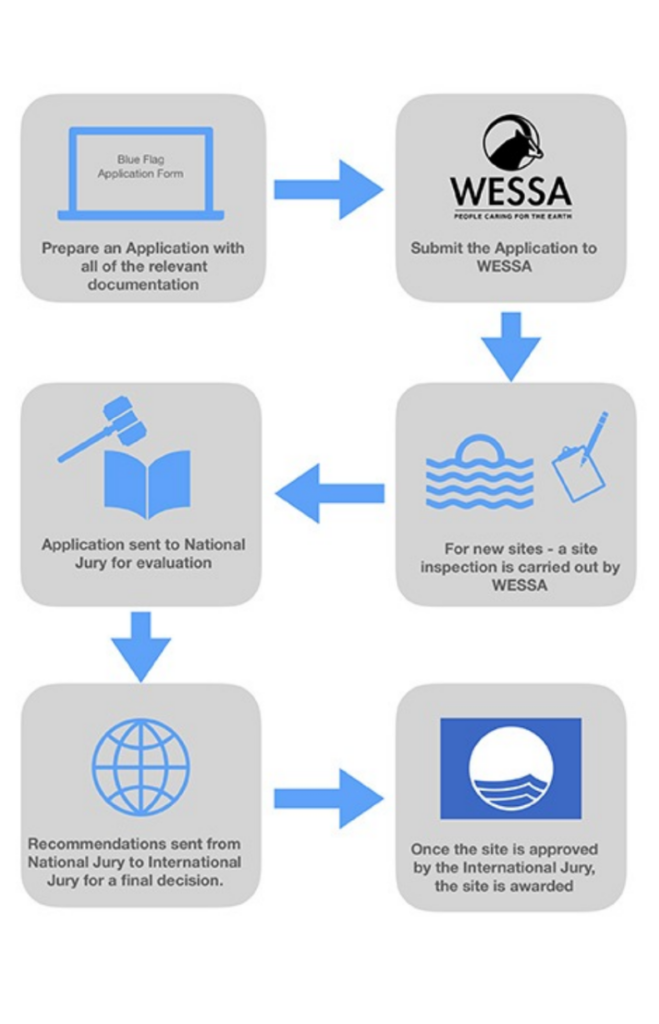 Toward the end of 1998 CoastCARE, a programme of the National Department of Environmental Affairs and Tourism, decided to investigate the possibility of implementing a Blue Flag campaign in South Africa. At that stage Blue Flag was a European award scheme seeking to reward local authorities for providing safe and clean beaches and marinas. The first Blue Flags were awarded in France in 1985. In 1987 the Foundation for Environmental Education in Europe (FEEE) took over the organisation of the campaign with support from the Commission of European Communities. In 1988, the campaign had spread to eight other countries (Denmark, Germany, Greece, Ireland, Italy, Portugal, Spain and the United Kingdom) and 391 Blue Flag awards were given. Ten years later, in 1998, there were 1927 beaches and 572 marinas in 19 European countries flying the Blue Flag.

In 1998, CoastCARE started an investigation into the feasibility of running the award programme in South Africa. The feasibility study adopted a phased approach to the investigation and possible implementation of a Blue Flag South Africa programme. One of the 10 key steps identified in this phased approach was the identification of the national organising institution. The original group of stakeholders in this feasibility study was made up of 74 NGO and research type organisations and 59 tourism agencies. This group of stakeholders took part in an extensive survey which looked at the feasibility of running such a programme in South Africa. One of the key questions asked to all stakeholders was whether the National Organisation implementing Blue Flag should be an NGO and the majority of respondents answered YES. Some ideas of forming a new specialist coastal organisation were proposed, while WESSA was also included in that original list. It was expressed how important it would be that the selected organisation should have a national footprint. The feasibility report concludes with:

“Following from the identification of potential NGOs it is therefore recommended that negotiations be initiated with the Wildlife and Environment Society of South Africa (WESSA) to assess the possibility of whether they could be the National Organisation. One of the main reasons in recommending WESSA is that they are one of the few national organisations with the capacity and capability of undertaking this role.” Upon completion of the feasibility study that took place between November 1998 and May 1999, a pilot study was carried out at eight pilot beaches. These beaches were South Beach (Durban); Margate (KZN South Coast); Orient Beach (East London); Kelly’s Beach (Port Alfred); Jeffrey’s Bay Main Beach (Jeffrey’s Bay); Humewood (Port Elizabeth); Melkbaai Beach (Strand) and Lookout Beach (Plettenberg Bay). This pilot phase of the programme was extended to 2001, which was the year identified for the official launch of the Blue Flag SA programme.

With the official start of the Blue Flag South Africa programme in 2001, there were only 5 beaches who qualified for the award. Five years later in the 2006-2007 season these sites had climbed to 24 beaches. In the 2012-13 season, South Africa welcomed its first 4 marinas onto the programme, which joined the then 35 beaches. Today, on the cusp of the 20 the anniversary National Jury meeting for the 2020/21 season, we will be assessing 63 applications, which includes 51 beach applications. If all beaches are approved, the 2020/21 season will see the highest number beaches ever awarded with Blue Flag status. Blue Flag is one of the longest running national coastal conservation and tourism programmes in the country. The addition of our successful Tourism Blue Flag project in partnership with the National Department of Tourism, proves how incredibly powerful long-term programmes can be. These long-term programmes are not just beneficial to the environment but also for the development of young aspiring environmentalists and tour guides, 300 of which have already passed through our beach steward training projects since 2016. In the last 20 years, the Blue Flag South Africa programme has not only coordinated the collection of thousands of water quality samples, carried out hundreds of independent beach control visits and environmental education activities, but has also formed extremely strong relationships with around 20 local municipalities around the country. We are excited about the future of Blue Flag in South Africa as well as achieving our vision of awarding 100 Blue Flag sites by 2030.